Carl Lewis on Being Vegan 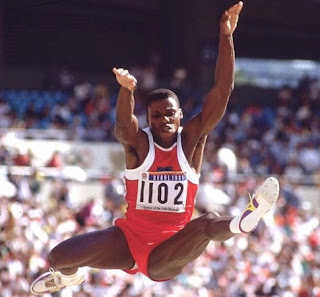 Can a world-class athlete get enough protein from a vegetarian diet to compete? I’ve found that a person does not need protein from meat to be a successful athlete. In fact, my best year of track competition was the first year I ate a vegan diet. Moreover, by continuing to eat a vegan diet, my weight is under control, I like the way I look. (I know that sounds vain, but all of us want to like the way we look.) I enjoy eating more, and I feel great. Here’s my story.

When I grew up in New Jersey, I always enjoyed eating vegetables and was influenced by my mother, who believed in the importance of a healthy diet even though we ate meat regularly because my father wanted it. At the University of Houston I ate meat and tried to control my weight the wrong way–by skipping meals. Frequently I would skip breakfast, eat a light lunch, and then have my fill at dinner–just before I went to bed. Not only is skipping meals the wrong way to diet, but the way I did it is the worst way because your body needs four hours to digest its food before you go to sleep. 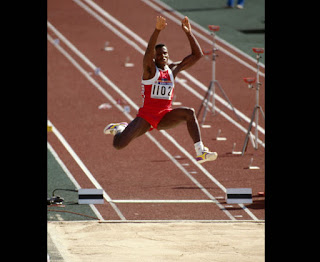 In May of 1990 I decided to change the way I ate when I realized that controlling my weight by skipping meals was not good for me. Within the space of a few weeks, I met two men who changed my way of thinking and eating. The first was Jay Cordich, the Juice Man, whom I met at the Houston radio station where I worked in the early morning. He was there to talk about his juicer, which makes fresh juice from fruits and vegetables. He said that drinking at least sixteen ounces of freshly squeezed juice each day will increase a person’s energy, strengthen the immune system, and reduce the risk of disease. A few weeks later while doing publicity for a meet in Minneapolis, I met Dr. John McDougall, a medical doctor who teaches about the link between good nutrition and good health and was promoting his latest book. Dr. McDougall challenged me to make a commitment to eating a vegetarian diet and then to just do it.

I remember vividly making the decision in July of 1990 to become a vegan. I was competing in Europe and ate a meal of Spanish sausage on a Saturday and on the following Monday started eating vegan. The hardest thing for me was changing my eating habits from skipping meals to eating throughout the day–which is much healthier. I also missed salt and so substituted lemon juice for flavor.

In the spring of 1991 – eight months after beginning to eat vegan – I was feeling listless and thought I might need to add protein from meat to my diet. Dr. McDougall, however, explained that my listlessness was due to my needing more calories because I was training so many hours each day, not because I needed more animal-based protein. When I increased my calorie intake, I regained my energy. I was drinking 24 to 32 ounces of juice a day. I ate no dairy products. And I had my best year as an athlete ever!


You have total control over what you put in your body. No one can force you to eat what you don’t want to eat. I know that many people think that eating a vegetarian diet - and especially a vegan diet – will require sacrifice and denial. Jannequin Bennett demonstrates in this book that eating vegan does not have to be tasteless and boring. As she says, “vegan eating is a truly indulgent way of life, as vegans regularly partake of the very best foods that nature has to offer.” Here are recipes that will excite your taste buds. By the way, a few of my own recipes are included.

Keep in mind that eating vegan does require a commitment to being good to your body and to acting responsibly toward the world around you. Most of us are not aware of how much damage we do to our bodies and to our world by the way we eat. I challenge you to write down everything you eat and drink for one week. You will probably be amazed at the amount of snacks you eat, the different ways in which milk and cheese are a part of your diet, and–worst of all–how much fast food you consume.

Most snacks such as cookies, chips, candy, French fries, or soft drinks are highly processed foods that have lost many of their useful nutrients. Worse still, most of these foods are loaded with fat, salt, and chemicals. For instance, a 1.5-ounce bag of barbecue potato chips has the same number of calories as a medium baked potato, but 70 times the amount of fat and 20 times the amount of salt.

Cheese and other dairy products are loaded with artery-clogging saturated fat and cholesterol. Most cheeses get 70 to 80 percent of their calories from fat.

You have to be especially careful when you eat in fast food restaurants. As the consumption of unhealthy fast food has increased, so has obesity, which is now second only to smoking as a cause of death in the U.S. Eric Schlosser reported in Fast Food Nation that the rate of obesity among American children is twice as high today as it was twenty-five years ago. Moreover, it seems that wherever people eat unhealthy fast food, waistlines start to expand. Between 1984 and 1993, for instance, the number of fast food restaurants in Great Britain roughly doubled. And so did the obesity rate among adults. Overweight people were once a rarity in Japan. Fast food restaurants arrived there thirty years ago, and today one-third of all Japanese men in their thirties are overweight.

Your body is your temple. If you nourish it properly, it will be good to you and you will increase its longevity.