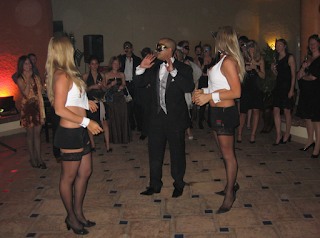 
In these days some Italian investigative journalists are discovering some shocking facts about the actual left wing government and the Prime Minister Matteo Renzi. It seems that the practice of a “notorious vice” also affects Partito Democratico (the current leftist and ruling political party in Italy). Some years ago the previous right wing government by Silvio Berlusconi was hit by a strong scandal about escorts and sexual favours. During the Berlusconi’s government, Partito Democratico, which was the opposition party, often condemned Berlusconi and his fellows for their uncontrolled expenses intended to pay luxury escorts. Moreover the Italian leftist politicians often proclaimed to have a moral superiority and to consider “these practices” a prerogative of the right wing and their neoliberal and anti welfares’ policies.

The extraordinary discoveries by these investigative journalists have completely dismantled the myth of the moral superiority from the Italian Left. In fact, when Mr Renzi was the Mayor of Firenze, its City Council squandered 31 million euros in “mysterious dinners and holydays in expensive hotels”. The Italian lawyer Carlo Taormina revealed that the expenses for these events also included the presence of high-level escorts[1]. Mr Taormina underlined that “escorts frequented Palazzo Vecchio (The Town Hall in Florence) when Renzi was mayor”[2]. The positions of Taormina attracted the interest of many Italian investigative journalists. Moreover some members of the Florence’s city council
and other rich people related to local politics received escorts as gifts and paid by municipal funds. In short the famous vice is bipolar and not only a prerogative of the right.

Another man called Alessandro Maiorano, a former employee of the Florentine city council revealed more details about “certain sexual practices” at Palazzo Vecchio. Mr Maiorano said that there was a trafficking of expensive prostitutes during the Renzi’s mandate as mayor and 20 millions of municipal funds were wasted for mercenary sex[3]. The first discoveries by Maiorano date back to 2013 and are back in vogue now. This man described a curious event related to this scandal. He said that Massimo Mattei, a councillor in the Renzi’s Junta, gave an expensive mansion as gift to an escort called Adriana. He also admitted that he is going to reveal other details about the sexual habits in the left wing[4].

Other recent discoveries allude to controversial scenarios more similar to the plot of certain erotic comedies such as The Hangover and American Pie than the normal routine in a municipal council. A Romanian escort for example spoke about hard-core sex scenes at Palazzo Vecchio during the night. These encounters also involved other famous Florentine people such as rich jewellers and entrepreneurs[5]. Moreover some politicians were accompanied to the Hotel Mediterraneo to have sex with other escorts. A person very close to Partito Democratico managed this hotel. Some wiretaps revealed assiduous conversations between Florentine leftists and expensive escorts. Finally a relevant wiretap unveiled that these women charged at least 1000 euros to have sex with politicians inside certain municipal buildings[6].