The location and dates of the forthcoming 2015 gathering of secretive elites under the Bilderberg Group banner has been confirmed. 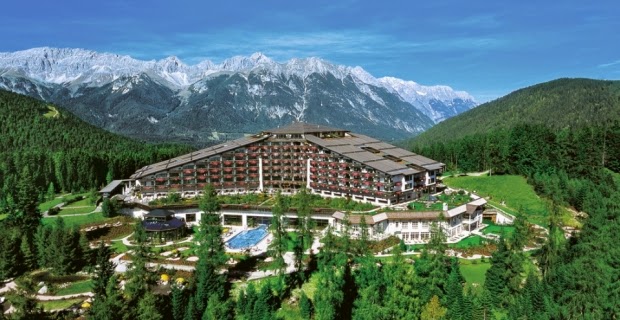 Local police have verified that the conference will take place at the opulent Interalpen Hotel, in the Austrian mountains near Telfs.

In a press release, the Austrian police revealed that security for the confab will be in operation from June 9th-14th. As is usually the custom with Bilderberg, the actual meeting of delegates will take place from the Thursday to the Sunday of that week, June 11th-14th.

The police press release notes that security at the Bilderberg meeting will be part of the same operation as security for the much more public G7 meeting, which is scheduled to take place at the beginning of the same week, 7th-8th June, at Schloss Elmau in Bavaria, Germany
.

“The security measures at the G7 summit on 7 and 8 June 2015 in Bavaria, and the Bilderberg Conference from 9 to 14 June 2015 in Tyrol were focal points of a briefing by Federal Minister Mag Johanna Mikl-Leitner and representatives of the Ministry of Interior and State Police Tyrol on 13 January 2015 in Vienna.” the press statement reads.

“The venue of the G7 summit lies only 3.6 kilometers in a straight line from the Austrian border, both events cover similar issues and take place one after the other, the G7 summit on 7th and 8th June 2015 and the Bilderberg conference on 9th to 14th June 2015.” the statement continues.

“The job of the police at the G7 and the Bilderberg conference is the protection of state guests, eminent persons and the general public,” the Minister of the Interior is quoted as saying. “The defense and prevention of attacks is a top priority. However, the police presence also ensures the protection of peaceful demonstrators, because freedom of assembly is one of the fundamental rights of our democracy.” the Minister is said to have added.

The statement also notes that in conjunction with German police, extra special police forces will be called in to operate security during the gatherings. Known as COBRA, the forces are Austria’s primary counter-terrorism special operations tactical unit. and are not part of the Austrian Federal Police but are directly under the control of the Austrian Federal Ministry of the Interior.

Major General Robert Strondl, Head of the Operations Department of the Interior Ministry noted that “For months we gather all the relevant information about both events and create risk assessments that are continuously updated and are the basis for all other plans.”

The statement also notes that police are considering “significant” traffic restrictions, and even a 30 mile no-fly zone around the Bilderberg meeting, to include paragliders and hang gliders.

Rumours over the venue for this year’s Bilderberg meeting, the Interalpen Hotel, were first touted back in August when enquiries to the hotel revealed that it was already fully booked on the first two weekends of June. The uncovering of Bilderberg came earlier than ever before, perhaps reflecting the intense scrutiny that the group has come under in recent years.

Interalpen-Hotel is surrounded by forest and mountains, close to a ski resort, and not too far away from Innsbruck airport. Its ‘Meetings And Events’ brochure, states that “the hotel lies at an altitude of 1,300 metres in an exclusive setting in the Tirolean Alps and offers panoramic views of magnificent mountain peaks.”

The venue, owned by Swiss manufacturing giant The Liebherr Group, has a 400-capacity conference centre with “a magnificent Alpine backdrop”. The hotel previously hosted the Bilderbergers in 1988, 27 years ago. If the latest reports are correct, 2015 will mark the third occasion that the conference has been held in Austria.

It seems that the elites have returned to form following 2014′s relatively transparent location in Copenhagen Denmark, where reporters were able to get up close and personal with attendees as they wined and dined.

The gathering this year is sure to be reminiscent of the 2011 meeting in St. Moritz, Switzerland, when Bilderbergers retreated into the mountains, shielded by winding roads and forest cover.

While the mainstream media habitually fails to afford Bilderberg the press coverage it demands – characterizing the group as a mere “talking shop” – innumerable examples of the organization having a direct impact on global policy have been documented in recent years, leading to charges that the group is fundamentally undemocratic in nature.

In 2010, former NATO Secretary-General and Bilderberg member Willy Claes’ admitted that Bilderberg attendees are mandated to implement policy decisions that are formulated during the meeting.

Bilderberg has influenced major global events ahead of time, picking Presidents and Prime Ministers on a regular basis with total contempt for the democratic process.

In 2013, Italian lawyer Alfonso Luigi Marra requested that the Public Prosecutor of Rome investigate the clandestine organization for criminal activity, questioning whether the group’s 2011 meeting in Switzerland led to the selection of Mario Monti as Prime Minister of Italy.

In 2009, Bilderberg chairman Étienne Davignon even bragged about how the Euro single currency was a brainchild of the Bilderberg Group.